The oscillating hook design was created by Singer in 1879 and finalised in 1895 as the Singer 15 model. It has been reproduced by oh so many, and is now known as the “standard domestic” type, with class 15 bobbins and 15×1 needles also termed “standard domestic”. Originally side-facing, it is now usually front-facing which allows sewing with twin needles.

Timing adjustment is a method to repair your sewing machine, so first of all: are you sure that it is broken?

If you are having trouble with skipped stitches or thread tension, it is much more likely that something simple is amiss, such as using the wrong needle for the fabric or needing to clean and oil your machine. I have written separate posts for such things, please look under “Maintenance” in the menu at the top.

But if you are sure it’s timing adjustment that you’re after, and this is the correct mechanism type, then read on! I’ve also written about timing adjustments for several other mechanisms, so again – check the menu.

Timing adjustment on an oscillator is based on the same principle as in any other design: when the needle is on its way up, the hook should meet it slightly above the eye, where the needle has an indentation allowing the hook to pick up the thread and form a stitch. Simple. 😉

Timing on side-facing machines is less sensitive to small aberrations than timing on forward-facing zig-zag ones because the latter have to work in a range between the left-most and right-most needle positions, rather than in a single fixed spot. Side-facing zig-zag machines actually move the whole mechanism left and right, so that the needle always meets the hook in the same relative position.

The photo above shows the hook meeting the needle in its left-most and right-most positions. Note that the meeting point is not the same with respect to the eye of the needle, but it still works as long as it is within the indentation on the back of the needle.

Getting to the oscillator

The oscillating hook mechanism is located under the needle plate, so you need to flip open your machine to get to it. On forward-facing designs there is also a pair of gears underneath it for that 90 degree rotation. The gears are usually located in a special compartment filled with grease (enough for a millenium), so be careful when you unscrew the cover.

To free the mechanism, you need to unscrew the seven screws shown in red circles below. On my machine, most of them require hex keys of different diameters.

The right half-gear is attached to the upper mechanism by a series of shafts which guarantees synchronisation. Lower the needle as far as possible, keep it there and rotate the small gear so that the two screws on its shaft are visible.

You don’t need to remove the mechanism, but if you wanted, that’s what it looks like: 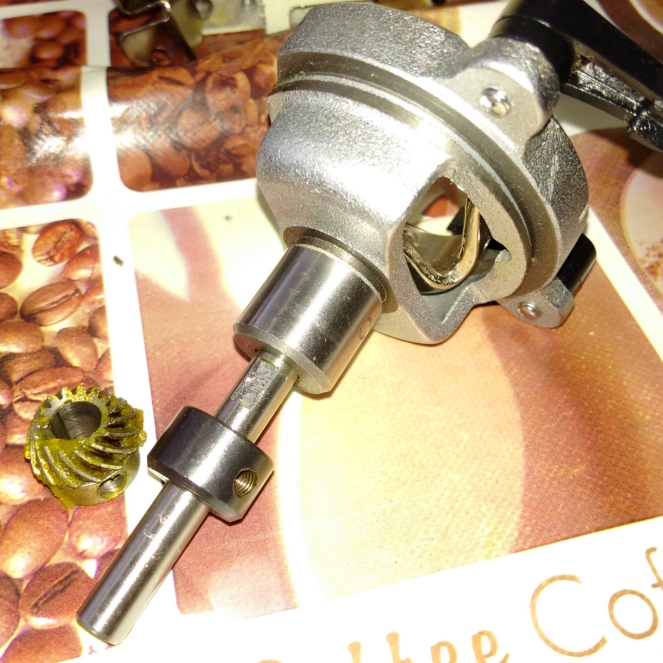 The first thing to do is to set the depth of the hook that determins how close the hook comes to the needle. If it is too far, the hook will miss the thread even if it is in the right position vertically. 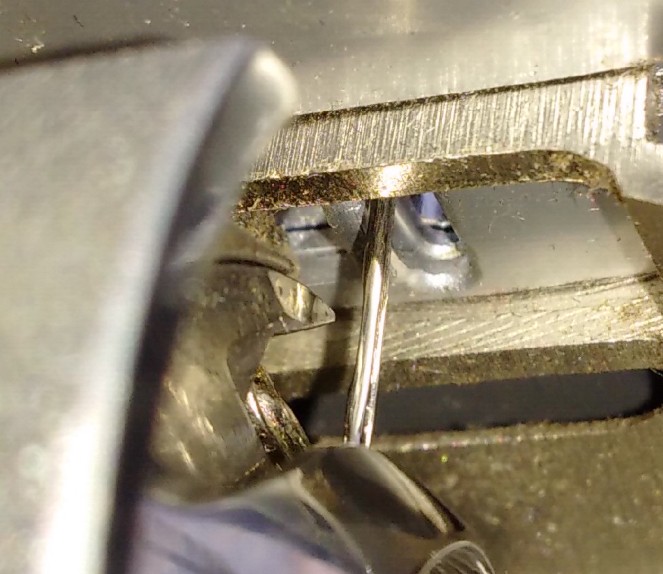 Put the hook into the cradle. The depth is set by pushing the entire mechanism along its axis, in or out of the big hole.

Align the needle and hook as shown above, fix the side screw and rotate the balance wheel to check the whole stitch cycle. Make sure that the needle comes close to the hook but does not touch it, or it will cut through the thread while sewing.

When the depth looks right, tighten the side screw to keep it in place.

This section only applies to forward-facing zig-zag machines. On straight stitch machines and on side-facing machines the needle always remains in the same spot with respect to the hook as it is.

On forward-facing machines, the needle has to be set in its left-most position.

This applies to all machines again. Turn the balance wheel towards you (as during sewing) so that the needle reaches its lowest point and just starts going up. If you are in a zig-zag setting, make sure the needle remains left-most. 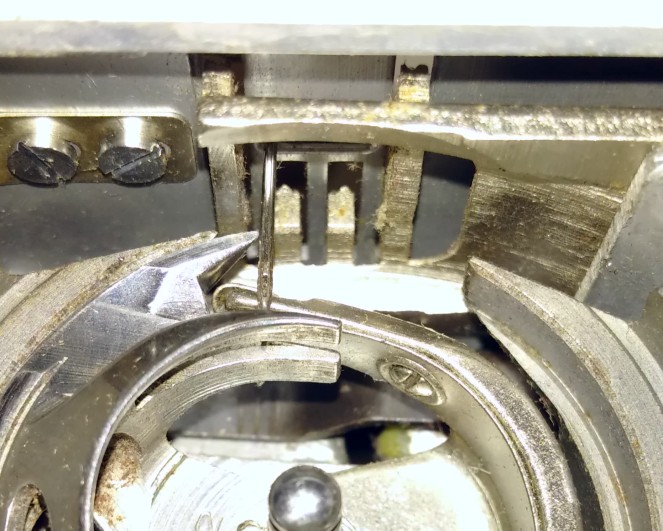 Tighten the screws on the bottom gear and try some sewing. Make sure you test stitching with the needle left and right to make sure zig-zag works too.

If the machine is skipping stitches, repeat the following until it sews properly: loosen the screws on the bottom gear, hold the hook in place with your hand and slightly turn the balance wheel to move the needle, tighten the screws again and try more sewing. Persevere and you will succeed!

If you don’t seem to manage proper sewing everywhere, perhaps the depth of the hook is insufficient. Go back to the section that explains how to set hook depth and try again.

Putting it back together

When your machine is sewing properly, it is time to put it all back together.

Push the black ring in the gear compartment upwards and tighten the screws. Tighten the rest of the screws, grease the gears and put the cover back on. Mind that grease!

That’s it! You are done. Congratulations.