Especially if that girl is a vintage sewing machine.

It’s only been about a year since I started using the older sewing machines, i.e., the ones of at least 100 years old. Before that, it was new machines at first (new in the early 1990s) followed by progressively going back in time until I found machines worth keeping.

What happened a year ago is that we moved house. In my old place I had two vintage machines decorating my sewing room (that is, the space previously known as the lounge), and this was all they were doing – decorating.

There, up on top, you see a Singer 98K and a Stoewer VS3, both bought for next to nothing and never intended for use because they were completely stuck and rusty. However, I was keen to prevent further rust formation, so I oiled them with 3-in-1 which says “Lubricates, cleans, prevents rust” on the label.

Do not use 3-in-1 for day-to-day lubrication! In my experience, this oil is more of a cleaner than a lubricant. But it is an excellent cleaner.

In this respect it is similar to old oils, which is exactly why it is so good at dissolving solidified oil. So if, in spite of this warning, you are using 3-in-1 for lubrication and your machine gets seized up, the best thing to free it, is to use 3-in-1, contradictory, as it may seem. It’s like the fastest way to melt ice is to pour water over it.
After that you must switch to a proper sewing machine oil for lubrication!

So then, there they were, my two vintage machines, sitting pretty and pleasing the eye, for the next five years or so.

When we moved last year, it was February, cold and wet, and I didn’t want to leave them in the garage to rust, so I brought them in. Stoewer didn’t have a lid, so I picked it up by the balance wheel and by the head – and nearly dropped it – the wheel spinned and the needle went up and down, almost through my finger! Whoahhh! It’s alive!!

That made me sit up and take notice. The 3-in-1 had completely freed the mechanism in both machines, and even removed the rust. With just the one oiling!

Of course now that my first bullet shuttle machine was moving, I had to take it for a spin, – and a whole new world opened to me – the world of flauwless stitching. My teachers in tailoring college used to say that one should not entrust everything to a sewing machine because your own hand can always sew better. “If your machine does not produce a perfect stitch, do it by hand” – was the mantra. But with this vibrating shuttle wonder I suddenly saw the end of my hand sewing! Whoah again!

Clearly, the Stoewer girl – now named Greta – had to join the sewing crew. I found out about the maker (see www.stoewer-museum.de), got her dated (1905), ordered new bobbins, swapped the hand-crank for a motor, added a light, lowered the presser bar to fit modern low shank feet, even got her a prettier face plate – they are the same as Singer 27 class. But one important thing still remained: crumbling varnish and vanishing decals. Something had to be done about that!

The original varnish was shellac, it dried out, cracked and was coming off in flakes. It was taking the decals with it too, so removing it was not really an option. I asked around, and polyurethane varnish appeared to be the answer.

This DuraClear varnish is of water-based craft variety, brush on. Spraying really doesn’t work here. It’s fast drying, very fast drying, so you can do 7-8 coats in under half an hour. Use a fine artist’s watercolour brush and work in light thin layers. That tiny amount of varnish in the bowl was all that was needed to do everything, so the whole bottle will take you through many, many machines. 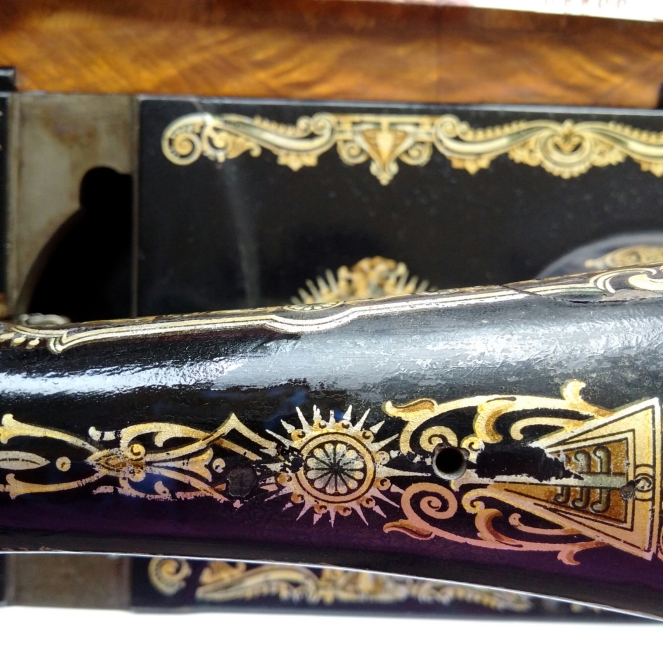 Here is the varnish going on. All I did as preparation was wipe the machine with a damp cloth to remove dirt. It had to be a very light wiping though to keep the decals from coming off! There may have been some traces of oil or grease left on the surface – no problem. Don’t fret over it, the varnish will still stick. After the first coat, it mostly sticks to itself, it’s like wrapping the machine in shrinking clingfilm.

I tried different methods on several occasions, but the best way I found was to apply a fairly thick coat with 8 layers or more straight away, then leave it to cure for two or three days. The varnish will be dry to the touch, and dust won’t stick to it, but it will still be gooey inside the coat.

At this point, your brush strokes will be still visible, in particular on the bed. 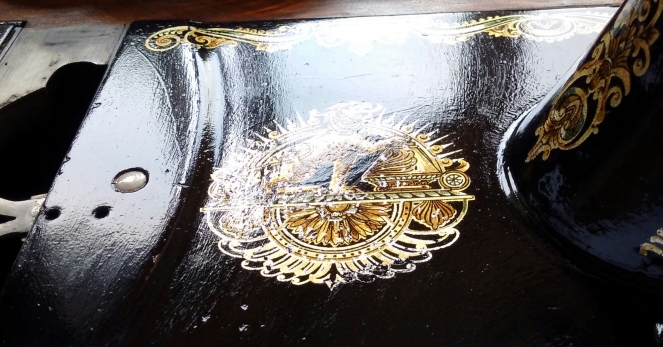 The first round of polishing with the 3000 grade is when you remove all ridges left by the brush strokes. This requires a lot of elbow grease! Keep going until the surface is smooth to the touch, don’t worry if it looks dull – this gets polished out in the next two stages. It helps to wipe off the oil every now and again and apply some fresh oil. Don’t forget to wipe it off the sandpaper too!

When you are happy with the smoothness, switch to grade 5000. This will polish out the dullness and the varnish should look clear now. It will still not be shiny, that comes with grade 7000.

If you discover some unforgivable ridges while doing the grade 7000 polish, you have to go back to grade 3000, then 5000 and then 7000 again to get rid of them. So it’s best to double check your grade 3000 result and not to be impatient to move on! Obviously, not something I would ever do. 😉

Anyway, after all this polishing you may be forgiven in thinking that you’re done. Not quite. The varnish takes about six weeks to cure and fully solidify, and in this time it will appear dull, clear, dull again, clear – it will vary as it cures. If you want a brilliant glossy finish at this stage, you can always buff up the varnish with a polishing cloth with a very small amount of silicone polish. But it won’t last, the varnish will go dull again after a while.

So be patient and leave it alone for a couple of months, literally. Then buff it up with a proper soft cloth and silicone polish – the stuff for removing scratches from acrylic head lights and mobile phone screens. Only use a very small amount of it because it dissolves the varnish! Alternatively, you could do another round of grade 7000 polishing with 3-in-1, then buff it up with a dry cloth.

This glossy finish will not go dull any more. In fact, you will be inadvertently buffing it up every time you use the machine. Well worth the wait!