After the “standard domestic” vertical oscillator from Singer 15, the drop-in bobbin horizontal hook is perhaps the next most common concept in domestic sewing machines. Originally introduced in Singer 66 in 1902 as an oscillating hook, it evolved into a rotary version in model 201 that appeared in 1935. Both hooks are found in many machines up to today. 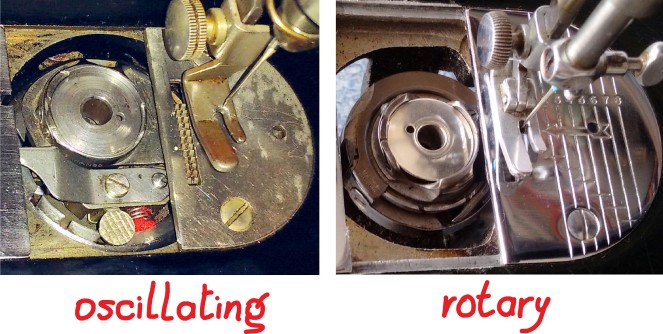 The original Singer hooks both take class 66 bobbin (guess where the name comes from), so not everyone is aware of the fact that these are very different hooks indeed. Post-1960s machines often take somewhat different bobbins as both horizontal hooks have undergone modifications. I don’t really know those newer variants though, so can’t comment on them. 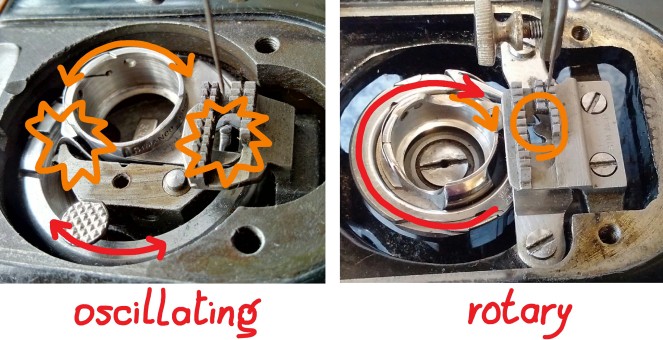 The bobbin case should ideally remain stationary in both hooks, but laws of nature being what they are, if you rub one thing against another, there is going to be friction, and so the other thing will move too, like it or not. And in both hooks, it is the ring under the bobbin case which constitutes “the hook” itself, as it is this ring that picks up the thread from the needle with a special cut-out.

The first horizontal oscillating hook from model 66 was side-facing. There was no reverse feed or lowering feed dogs – the latter is not possible with this mechanism because there is nowhere for the dogs to go! The hook is right beneath them. There is no bobbin case, so you drop in the bobbin into the cradle, pass the thread through a notch and under the tension spring, and off you go.

The same design was also replicated in Singer 99 which is a smaller version of 66. The 99s were in production well into 1960s and acquired reverse feed along the way. However, being smaller, they don’t have the power or the space of the 66, and although they are still very good for most domestic sewing, quilters prefer the 66 for the harp space.

This hook is driven with arch joints right below it: 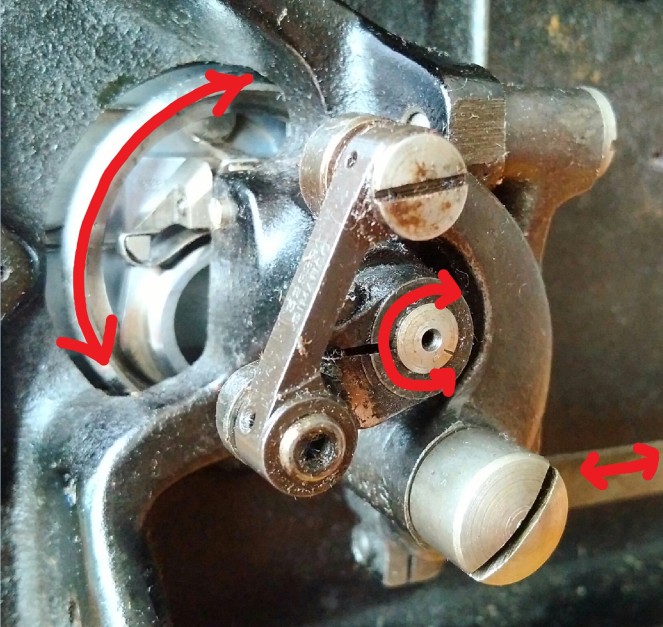 In 328K and similar machines, the hook is forward-facing.

It is a simple modification in the design, it looks just like the original.

The machine could now sew zig-zag, use two needles and even sew chain stitch with a special adaptor.

Those curved levers are quite complex, someone thought, and all they do is make the hook spin left and right. Surely, a simpler solution could do the trick just as well!

I must admit, I am not convinced with this design. The many levers in the previous version were cushioning the movement making it lovely and smooth, in spite of the stops and starts of the oscillation. This simplified design however feels bumpy, with jerks at each change of direction. But then again, the 98K was a budget machine, and in spite of the jerks, the stitching is still very good. Plus, this design requires less frequent oiling.

But why do we need steel gears when we can use nylon belts? The same thing could be achieved with a simple timing belt, if the shaft coming down the column from the balance wheel was not moving left-right, but already oscillating the way the hook should be oscillating. After all, you have to translate movement anyway because nothing in the sewing machine rotates like the balance wheel.

This design could also be used for rotation instead of oscillation, after all movement translation was now happening somewhere by the balance wheel. And here is Singer 368 “Fashion Mate”:

But they look the same! From below, yes, but the hooks are different:

The Panoramic on the left has a retaining finger that the hook bumps into when it changes direction. It is that black thing to the right of the bobbin case, it is very similar to the finger in other variants of the oscillating hook.

The Fashion Mate on the right just has a surround to stabilise the hook, and no finger.

And just when you thought you had it all figured out, Singer builds model 431G: it’s rotary but has the finger surround!

If you are not sure what kind of hook your machine has, simply turn the balance wheel slowly and observe the motion. You’ll soon find out whether it’s rotary or oscillating!

You often hear that a rotary hook is without a doubt much better than an oscillating one. This is an absolute statement, and I mistrust absolute statements (do all women love pink?). It all depends on the actual hook.

Personally, I quite like the original oscillating hook with curved levers. It has a smooth movement with a good rhythm. I like the rhythm. I’ve had a 201K model with a rotary hook, and although it is considered by many to be the best straight stitch machine ever, I didn’t keep it (or rather them, as I’ve had several). It’s a great machine, no doubt, but I found the mechanism a bit heavy going overall (not due to gunk), and I missed the rhythm.

Besides, there is so much more to a sewing machine than just the hook. Perhaps it is even more important how well those different parts fit together. And more than anything, I think it is a matter of taste.

One thought on “Singer drop-in bobbin – the two horizontal hooks”