I’ve already had one of these – a Singer 66K with Lotus decals (although I think they are thistles really). But I sold it in a misguided attempt to reduce the number of machines in my sewing corner. Have been missing it ever since, so had to get a replacement. 🙂 But I promise to sell something else!

This Singer 66K was made in 1907 within the very first Scottish batch of its kind! It has a number of features that were changed later:

As you can see, this machine has badly degraded bed decals, but luckily I have some brand new waterslide decals for it in exactly the right variant! They are made by keelersales.com and look amazing. I intend to apply them directly on the remaining foiling. Here is a comparison with a later model (the right picture is from a 1917 Singer 66K). Notice the red tips on the flower band disappeared in the later variant.

Here are the two bobbin winders with their balance wheels: 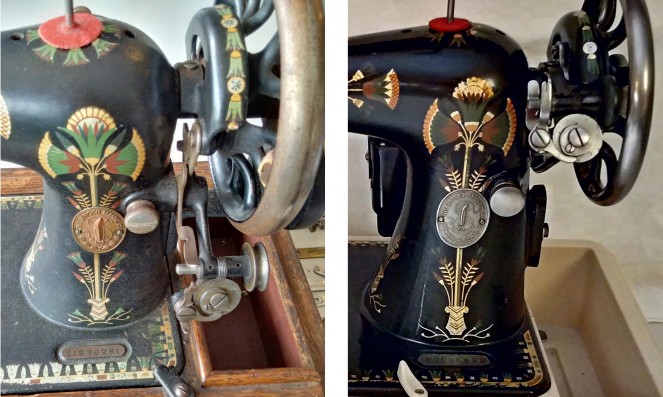 And here are the feet and face plates:

You will have noticed that the 1907 machine looks very dirty. That’s because it was very dirty when it arrived! But a bit of soapy water rids you of grime, grease and degraded shellac while leaving the decals intact, if you go easy on the rubbing. 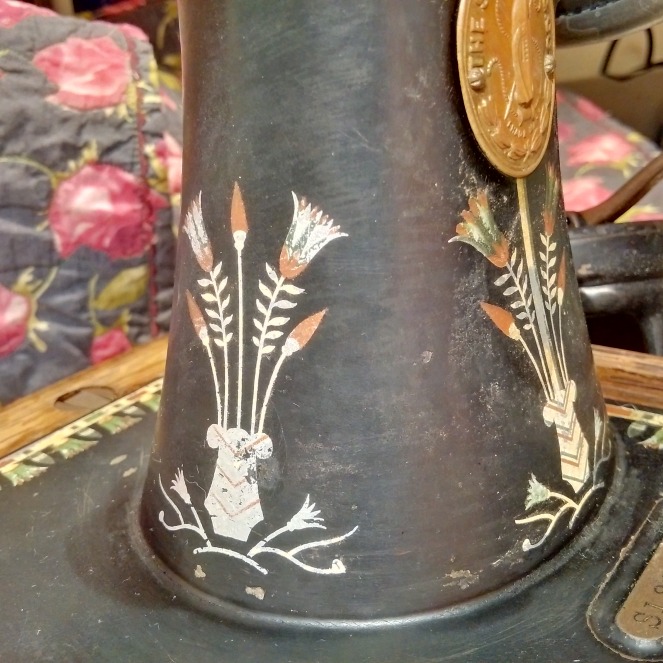 This is the finish after cleaning: matt paint with decals on, and some remnants of shellac that are still clinging on.

Look at that balance wheel! All the rust gone after soaking in a rust remover. Ready for new decals and varnish!

I must say here that I don’t have the decals for the flower border. The full set is expensive – the ones I’ve got was a lucky one time sample sale. However, I don’t need foiling because it’s still in place, so I bought some waterslide printing paper and intend to produce simple colour decals with my inkjet printer, to apply over the foil. I think this should work well enough! Stay tuned for updates. 🙂

Ok, I am not the fastest of tinkerers – it’s been nearly 9 months since I got her! But finished she is and sewing like a dream (is there such a thing as “dream sewing”? like “sleep walking”?).

I did not design any of my own decals but instead used the ones I had, with some creativity. 😉

The border at the front and sides was in particularly poor condition – erased down to the underlying foil layer, and I didn’t have a matching decal. But I did have two borders meant for the hand-crank, so I combined them and made a new border for the front (first sanding off the old foiling). I also had three of those big flower decals for the main pillar – so I used the flowers as corner decals for near the needle plate which covered up the old border nicely, I think.

I did have the central decal, but as you can see it turned out not to be an exact match for what was there before. Still, I think it looks good, even with the old foiling coming through where it shouldn’t have.

I have also re-applied fresh decals on the flowers on the arm and column, but not the top big flowers – they were still good. The Singer logo turned out to be in a slightly different font, so I couldn’t use that, and only did the flowers there. They had to be applied one by one and not as a group as I had hoped, because the distances between the flower stalks were slightly off. 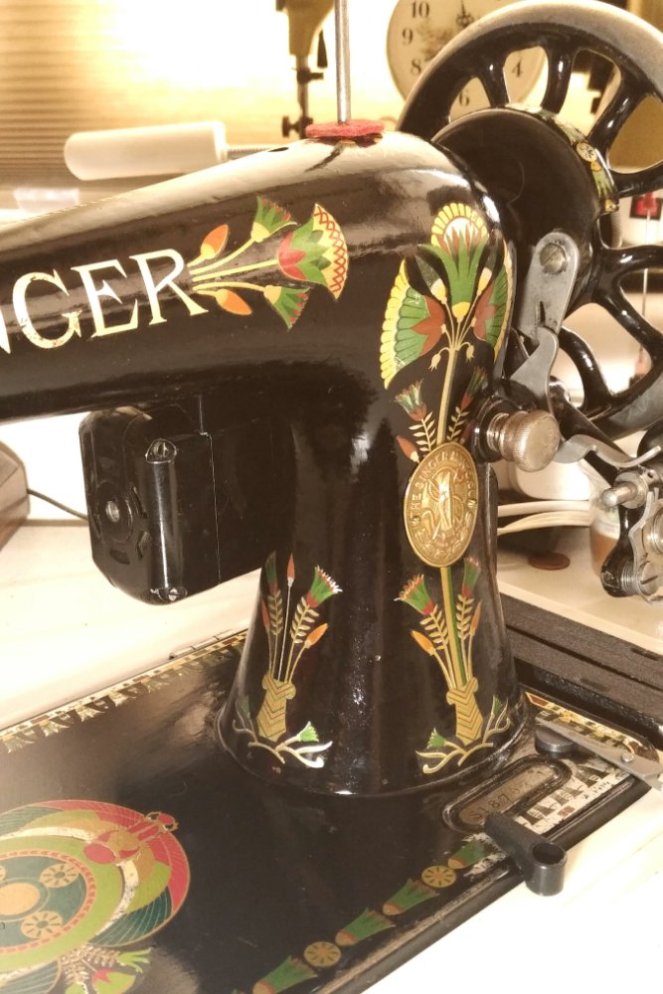 Overall, these decals are brilliant – the plastic is nice and strong so that you can reposition the decal many times in order to get it exactly in the right spot. I think it is not surprising that there were small differences in distances – the old decals were not printed on plastic (it didn’t exist), so they could move slightly during application. Besides, there could well have been slightly different versions produced to begin with! So I think these reproduction decals would work best if you are applying them directly to paint rather than trying to freshen up partially existing old decals.

Once the decals were on, I varnished the lot with polyurethane varnish. It is still curing, so it’s not yet perfectly smooth. I think I’ll do another layer as well, for durability.

The sewing is soooooo smooth! 😀 And this is an oscillating hook machine, so according to urban legend, it can’t help being jerky. Well, obviously it can.

The 66 is a heavy duty machine: it has a strong feed and increadible punching power (don’t get you finger under the needle). So, logically, it is not brilliant on chiffon and other flimsical stuff. 🙂 It doesn’t rip it to shreads or chew it up, but the seam is rather too tight for my liking. But no matter! It’s not what it was built for.

This machine does very well on anything from cotton lawn and up. At first it was having trouble with uneven thicknesses, such as going over thick seams. It would get stuck before the seam and then skip a few stitches right after it. (Toyota Jeans even lists this as normal behaviour in the manual! No, this is not normal behaviour.)

I could not believe however than the 66 should not be able to sew over heavy obstacles – it must be a setting somewhere…
After some experimenting, I found that this happens if the feed dogs are set too high. My 66 has extra wide feed dogs, so they can be set lower than in other machines and yet get the same amount of feed. And with lower feed dogs also chiffon gets a gentler treatment. 🙂

I am not sure that there is a universally “correct” feed dog height, even for one and the same machine. I suppose it depends on the types of fabrics you sew most, as well as on your general sewing preferences. Do you like your seams to be quite tight and give your work quilted appearance? Do you like them looser so that the thread lies on the fabric? Your preferences determine whether you generally sew with high tension or low tension, and that goes with the corresponding foot pressure and feed dog height (high tension – hight foot pressure – higher feed dogs; low tension – low foot pressure – low feed dogs). A change of feed dog height of as little as half a millimeter makes a noticeable difference to the sewing.

So with the handling of uneven thicknesses sorted, one mystery still remains: uneven tension.

What on Earth is going on here? This is the reverse; the blue top thread is pocking through every now and again. 😦 This gets less noticeable as you increase tension, but it’s still there, you just don’t see it quite so much.

It looks like the upper tension changes periodically all by itself, going higher, then lower, then higher again… every 30 stitches or so. This is very suspicious! It isn’t me speeding up and slowing down – I tested that. It isn’t the spool catching on something – checked that too. Is it something inside the machine? But what would have a cycle of 30 stitches? Like I said, a mystery. It could be just gunk inside the joints – there’s plenty of that and they are all oozing black zombie blood, which is gunk dissolving. I think the best thing to do is to give the machine a good work-out, and then to check again. I see a quilting project coming up! 🙂

Fast forward a couple of years, and I finally got to the bottom of this mystery. Gunk.

There was (and still is, but reduced) a gunk blob in the lower mechanism, most likely in the main column that oscillates the hook. It is a big joint with a large internal surface. The blob gets disturbed during movement and every now and again it turns and blocks the joint. Or tries to anyway, the machine keeps sewing but produces a jolt which sends a powerful pull to the upper thread which in turn unwinds a length of thread from the spool. This length of thread is then being used up for sewing is normal, except that it comes with reduced tension – there is no tension normally caused by the spool that needs rotating. So this “pre-unwound” length of thread is then showing up on the stitching sample as low tension stitches with the loops coming through to the underside.

The solution to this problem is simple: more sewing. 😊 The movement in the machine keeps dissolving the gunk in the joints, and one day there will be no jolts anymore!

In the meantime, I’m looking at installing a pre-tensioner which is a little set of tension disks with only small tension placed on the thread path before the main tensioner. It ensures that the force needed to rotate the spool does not affect the thread tension, so any jolts would make no difference.

31 thoughts on “Singer 66K – another homecoming”