…that makes a fabric appear “heavy duty” to your sewing machine. Let’s not count how many decades it took me to figure that one out! 😳

But first: what do I mean by “heavy duty”? Something that requires significant punching power to get through. Like saddle leather, sail canvas, military felted wool, but also many impregnated, foiled and coated materials, mackintosh cotton, denim, beach chair canvas – all of these sound quite “heavy duty”, and I’m sure you can add a few of your own. But how about this: fine Egyptian high-count cotton, silk taffeta or Oxford weave shirting, cotton or viscose? And some microfibre interlace knits? Not something I thought of as “heavy duty”, that’s for sure.

Turns out, the key is not in the thickness of the material but in its density, so dense high-count cotton, even lightweight, is just as difficult to punch through as impregnated raincoat canvas. On the other hand, thick but “loose” materials like soft fleece are easy to sew even by hand.

Lockstitch sewing machines are not particularly fussy about the density of the material they are sewing, except of course plastic-geared machines that just stop or break their gears – we are not talking about those. Overlockers, however, are much more sensitive to the density of the material – they require significantly different tensions or even refuse to sew some fabrics altogether. This is because when thread tension becomes too high for a particular overlocker, as needles and loopers bend under tension, they come too far away from each other and stitches get skipped. It is normal for needles and loopers to bend, the machine is built for it. The point is that the amount of bending must be within a certain small margin so that needles and loopers would still meet and form stitches. For the ins and outs of that, see two of my previos posts: the first post and the second post.

Heavy duty overlockers have “beefier” components and use thicker needles (or special hardened needles in industry). But these same beefy parts together with a strong feed don’t give good results on soft and light fabrics which just get chewed up. So you need both kinds of machines.

All these insights came from my attempts to sew what I thought to be rather lightweight summer viscose. 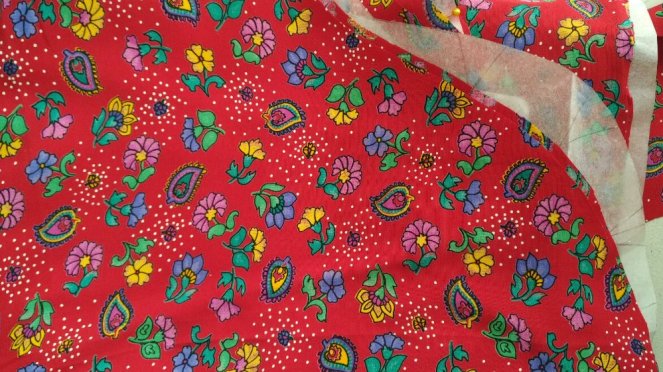 But it is rather densely woven in Oxford weave, so that it drapes beautifully and keeps shape a bit.

I tried using my fine overlocker on it, and although it almost managed, the stitch wasn’t great, I had to deviate a lot from the usual settings and some stitches were skipped. “Feels like the fabric is too heavy for it!”, I thought. Nah, can’t be – it’s only a summer dress! But still I decided to try my heavy duty overlocker. Perfect stitch on standard settings. Oh! 😯

And then all my previous mis-adventures suddenly started making sense! I was not treating dense fabrics as heavy duty!

Dense mircofibre knits are even worse in this respect – they also stick to the needle. The same goes for foiled fabrics.

For example, dense “nanotex” interlock jersey would not get sewn properly, not even with special needles.

I had more skipped stitches than well-formed ones. And those machines had no trouble with triple layer denim, so clearly they possessed enough punching power.

The problem there was that that nanotex jersey was sticking to the needle and thread preventing them from forming a loop for the hook to catch. It wouldn’t have had such a devastating effect if the jersey was loose knit, but being dense sealed the fate of that sewing excercise. The solution was to use a vibrating shuttle machine with a different needle drive allowing it to overcome any sticking of fabric quite easily. See this post on how they do it.

I still don’t know how to sew such knits on modern machines. As for non-sticky dense fabrics, you would normally use a thicker needle. Except of course on fine fabrics like that Egyptian cotton or Oxford weave viscose. The solution there is simple, really: use needles with a sharp point.

Looking at the picture above (from Wikipedia), there are several sharp points: universal, jeans, microtex and leather, so which one to choose?

First of all, not leather: the leather point has a blade on it, so it will cut through the threads in your fabric. It’s for leather only. 🙂

Jeans needles appear to have a slightly different shape from the universal needles. Schmetz jeans needles are also made of harder steel. But I found that jeans needles from many other makes are exactly the same as their universal ones – I looked under strong magnification. I think that since you cannot see the difference with a naked eye, many makes simply see it as an easy way of making money. 😦 I use thicker universal needles on denim without any problems.

Now we are left with universal and microtex. Microtex needles have an acute round point (SPI) also known as the “slim set point” (SSP), they are recommended for microfibre jersey and most delicate densely woven fabrics like silk (see this PDF from Schmetz). They feel sharp to your finger because the point is slim and penetrates the skin; but that slim point is also quite fragile and bends easily, so if you use these needles on high density fabric, they tend to go blunt very quickly and start punching big holes.

So which needles are best? Well, the most ordinary universal ones. 😁 Use them with your dense fabrics – you can even try them on overlockers that take 15×1 needles. There’s a reason they are called “universal”… 😉

14 thoughts on “It’s not the thickness, it’s the density”