During the latest clear-out at my mother’s prompted by the imminent downsizing and having to move, she came across a stack of linens that she inherited from the clear-out of her late mother, some 20 years ago now. In that stack there were some old linen towels with faded embroidery, some fine but old lace table cloths, some crochet doilies, that kind of stuff. When I saw it, it all looked familiar… Hang on…

Those long and narrow linen towels was what me and my cousin used to wrap around ourselves playing mummies, aged 1. No, I don’t remember doing it, but I remember my grandmother telling me about it later. Those were her common bathroom towels, each 2.5m long. They were well worn already in early 1970s because she got them in 1945 from her mother-in-law among a few other things for the newly-weds, my grandparents.

My great-grandmother made those towels for her son and his young wife. Linen, made of flax. She grew the flax, made it into fleece, corded and spun it, then wove the cloth on her narrow loom. Thick and soft, perfect for towels. She then embroidered them with traditional double-sided redwork designs (those were towels!), made bands of Hardanger lace and finished them with some bobbin lace made of the same flax thread that she used to weave the cloth with. 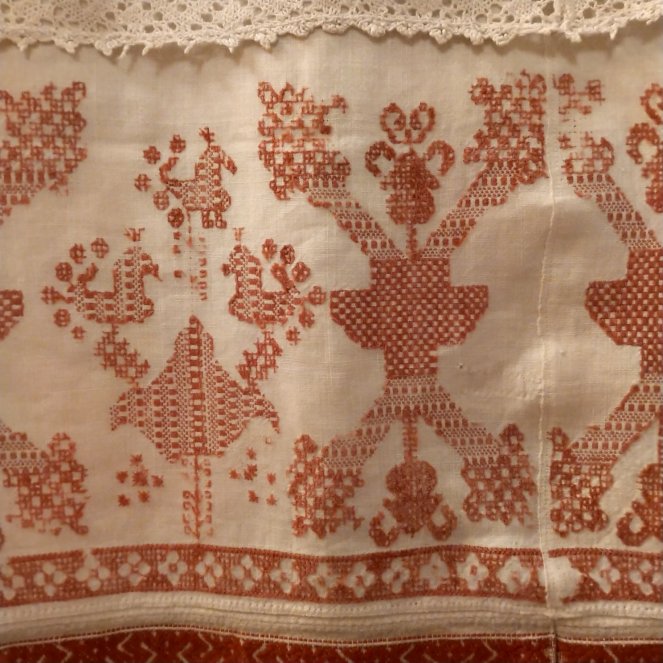 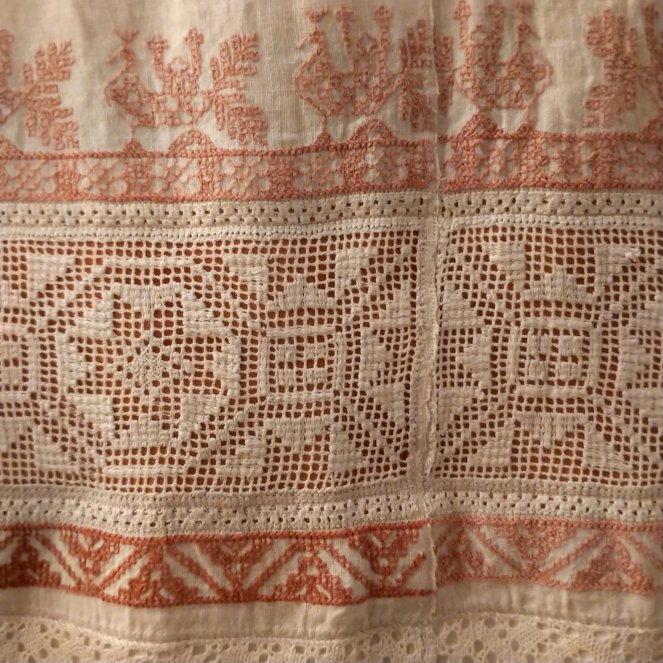 Those towels were in constant use for the next 50 years, so yes, redwork faded somewhat. But the linen was still soft and strong, without holes, although quite thin now. It probably had another 50 years of use in it – flax is a very resilient fibre.

Of course when I saw this stack of goodies, I didn’t need to be asked twice whether I was interested. 😊

I decided to make a wall hanging rather than to continue using the towels as such. I’ve cut them in the middle and sewn two halves together to get double width – you see the seam in the photos above. There were three towels, so I arranged them one over the other and put a coloured cloth under the Hardanger lace to show the design better. Then, I topped it with one of those large crochet doilies from the stack – my grandmother’s work from 1980s. 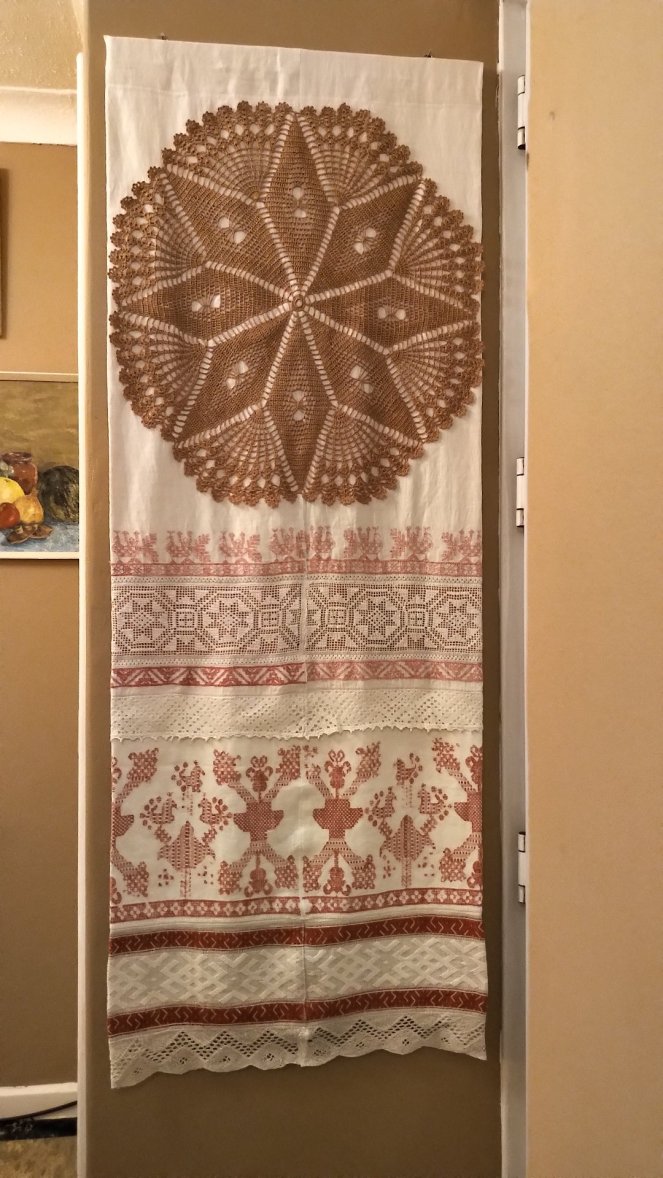 I think this came out rather well. 😁

I am not sure however of the origin of the woven decorative band on the bottom. It looks modern, that is, possibly shop-bought in 1960s, but it is woven to exactly the same width as the towel cloth. How could that be? Of course, this is a traditional technique and design that in itself is much older than 1960s, so conceivably it could have been woven by my great-gran too. The towel is made and finished in exactly the same way as the other two, seemingly by the same hand… Or may be just by an equally skilled hand later – we’ll never know now!

For those of you who like technical details 😋 – this is two layers of linen throughout. I cut off the plain bit from the middle towel and sewn it onto the end of the plain bit of the bottom towel to get almost the same length as the top towel. I folded the sides and hand-sewn them invisibly on the back. 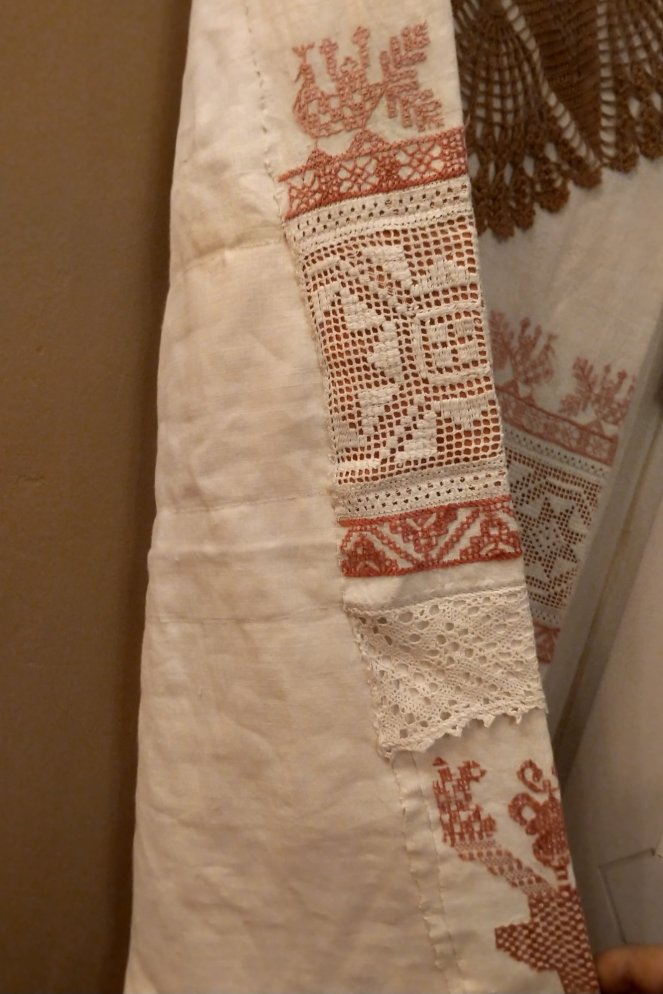 You can see here the original selvage of the towels.

I have sewn on the doily with zig-zag. 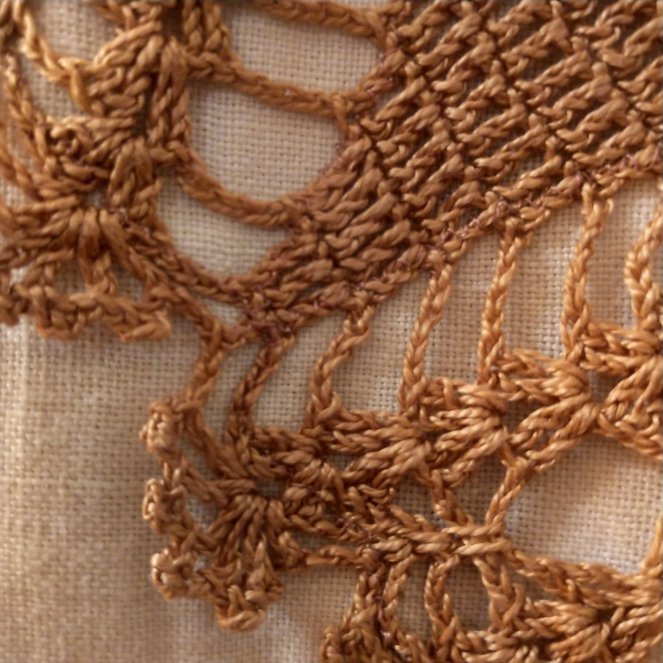 See the stitches? No? Try this: 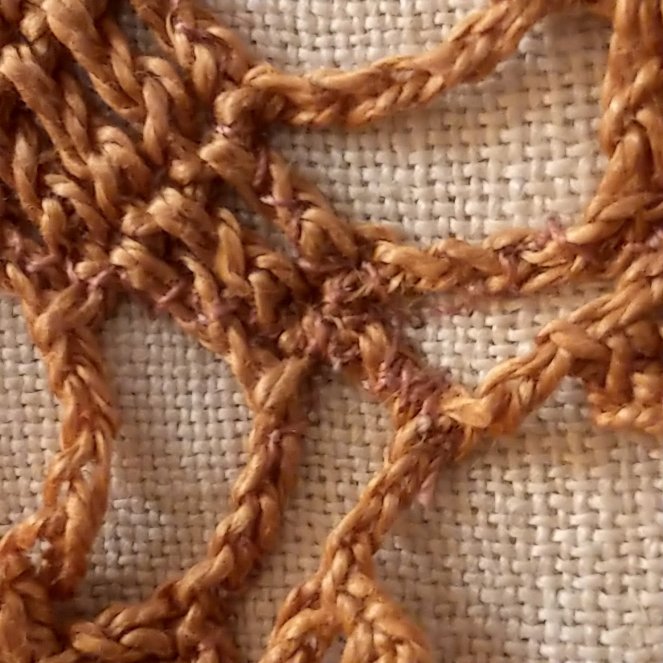 The stitches blend in with the crocheting, much better than if you were using straight stitch (here is another post about this effect).

Then, to make sure that my heavy and slinky linen hangs straight, I made a channel at the top and inserted a flat piece of timber. This also gave me a lovely base to which to attach picture frame D-rings. 😊 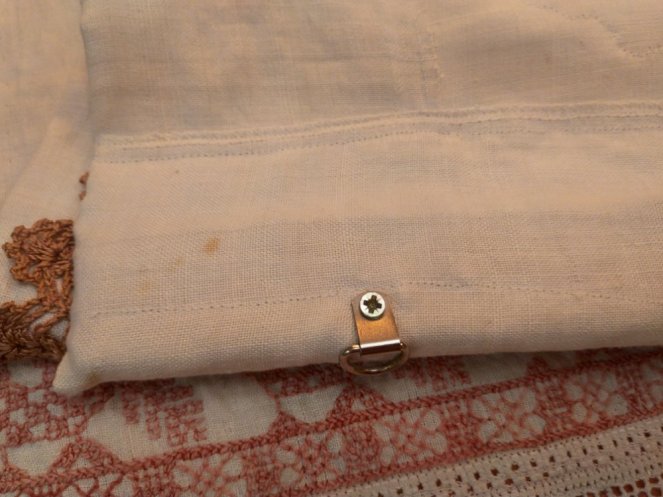 The memory is living again in my kitchen! 😃