Never mind the coronavirus – this is much more serious! Being stuck in lockdown causes serious spending.

How can anyone resist a cyclops? Impossible!

This is a late 1880s Varley & Co. transverse shuttle machine known as “The Cyclops” – their trade mark. It is based on Singer 12 but has double-sided feed dogs. And yes, the bed broke in two during transit. ☹️

There – a miracle of photography: the badge, the bed decal and the serial number all in one picture. 😉 The serial number is 66200 M56. There are no real records, but anecdotal evidence (a.k.a. hear-say and wishful thinking) suggests it dates to approximately 1888, give or take a few years.

The first job is to glue the base. I’m using Araldite 2-component epoxy for steel and other metals, notably also cast iron.

Although I wouldn’t be shipping it anymore. Looks like this Cyclops got itself a permanent place here. ☺️

Next step is varnishing to preserve both the lovely decals and the glued bed. And no, I won’t be dropping it in order to test the strength of this bond! 😠

This is another machine with double-sided feed dogs. Plus, it is the size of a Medium machine – 13 inch bed length. Family machines were 12 inch. Serial number is 26569 putting her in 1882 according to sewingdownmemorylane.com. Wow! 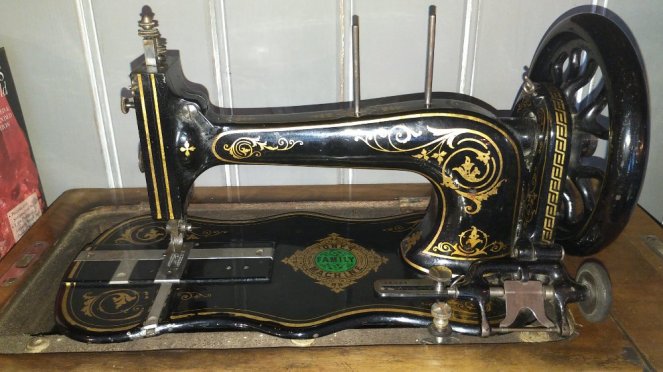 There is also Jones Medium TS out there, it is marginally larger but not in the length of the arm as is usually the case. Instead, it was made to sew leather, so it is slightly wider, has a thicker arm and beefier axes, and a much larger shuttle (and bobbin). The extra length is due to a longer shuttle race. I want one! But they are rare, so I’m happy to start with Family.

This machine was a treadle but the bottom has perished. I’ve got the table top, the draw, the machine and the lid. So no portable base and no hand-crank, and also no boss to mount one. Hmmm. It is temporarily sitting on a base from a VS2 machine – a full size base! That’s because a 3/4 sized base comes up too small!

The first job here is to repair the table top which cracked length-wise. It is a good useful size of 80cm x 40cm, and has a metal tray that screws underneath. It broke because the tray is convex rather than flat, so when they took it off the treadle legs and put it on the table, the top split as it was not lying flat. So I’m boxing in the tray from below and adding padding at the edges of the top, so it would rest on that padding like an oversized base.

Turn it over and I have a useful base, good space for sewing, I’m sure I’ll be able to tuck it away here somewhere… 🤔

These are not the only TS machines in my sewing room! There’s the Singer 48K that I’ve been using a lot recently making thin jersey tops; there’s little Vesta Saxonia that I made to sew jersey so that I could sit in the garden; there’s Brothers Nothmann TS with its unique integrated geared hand-crank that allows to use a treadle or attach a regular anti-clockwise motor without dismantling the hand-crank; there’s Hengstenberg/Anker Wittler TS (transverse vibrating shuttle); and of course there’s Wertheim TS that I now decided to sell! It’s on eBay – I have too many machines.

So why did I buy these two? The feed dogs – both double-sided, not just left-sided like the rest of my TS machines. I’ve been finding that left-sided feed dogs tend to pull to the left which is not noticeable with woven cloth but becomes more and more prominent – and annoying – with jersey, in particular with very elastic jersey with lycra. 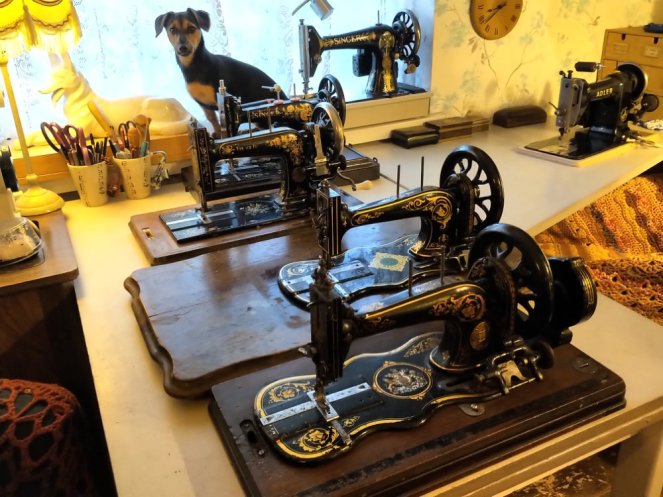 27 thoughts on “The transverse shuttle bug”